What Makes a Suburb Special?

Finding the right suburb is the most important factor when it comes to purchasing a property, whether you are buying your first home, searching for your family home, downsizing or simply looking to invest.

Apart from financial drivers, personal preferences can dominate the purchasing decision. Every suburb has different qualities that hold more value to one person and less to another, particularly for owner occupiers and investors. Place Advisory regularly receives feedback from buyers on what they are looking for, so we have highlighted some of the most important requirements below.

As shown above, Windsor and Newmarket tied for the fastest selling suburb in the inner ring, both recording just 49 days on the market with a median sale price of $437,500 and $405,000 respectively. These suburbs are a popular choice for buyers as they are situated in close proximity to the Brisbane CBD and have easy access to train stations, bus services and retail precincts. 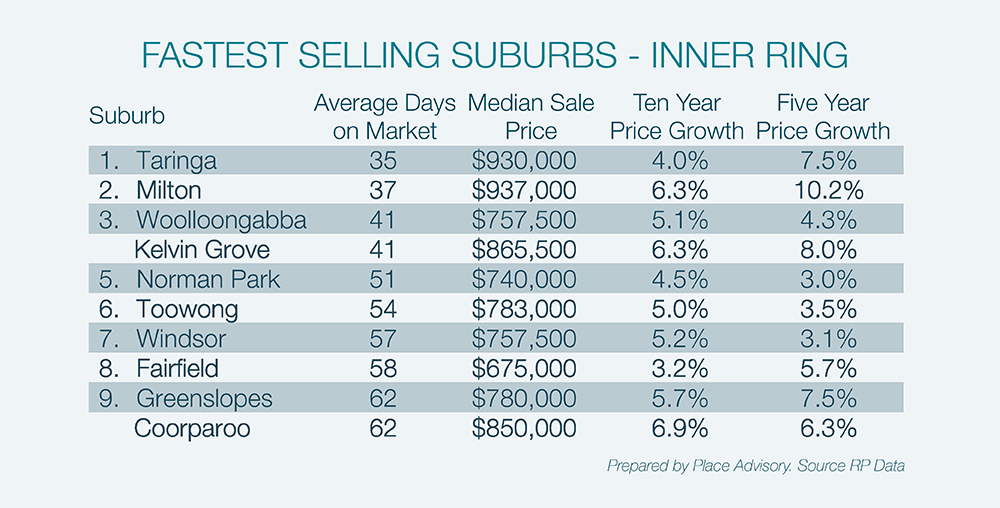 The suburb of Taringa was inner Brisbane’s fastest selling suburb over the past 12 months ending November 2016, with houses recording an average of 35 days on the market.

These inner ring suburbs are highly competitive due to their proximity to the CBD, access to schools, public transport options and various other amenities.

The fastest selling suburb for houses in Brisbane’s middle ring was Chermside West, recording an average of 34 days on the market.

As shown in the table above, houses in Brisbane’s middle ring recorded lower days on the market in comparison to the inner ring. This is a result of affordability in the area, with houses in the middle ring being 21% more affordable than their inner ring counterparts.