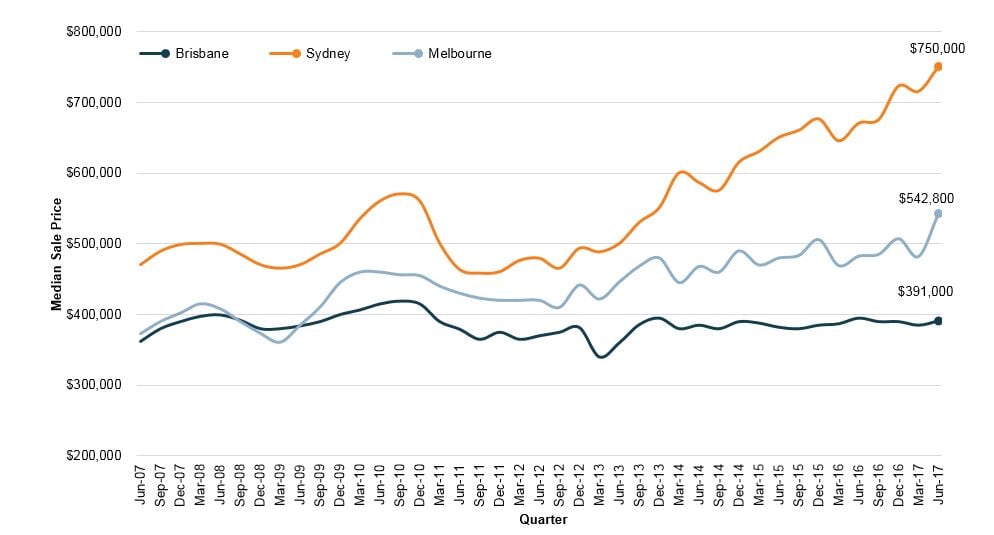 While apartment development approvals have remained at high levels throughout Australian capital cities in the year ending June 2017, 83% higher than five years prior, they have declined by approximately 12% year on year. Talks of an apartment oversupply continue to paint a dull picture of the Brisbane apartment market, while demand in Melbourne and Sydney has appeared able to keep up with the supply of new apartments. Over the past 12 months to June 2017, Apartment approvals have accounted for 55% of all residential approvals in Australia. This is 2% lower when compared to the same period in 2016.

As shown in the graph below, the majority of all apartment approvals in Australia, 86%, remain in the three major east coast cities of Brisbane, Sydney and Melbourne. In the year ending June 2017, the proportion of total apartment approvals has increased in Sydney and Melbourne by 5% and 1% respectively, whilst it has declined in Brisbane by 5% when compared to the same period in 2016.

It is important to recognise that apartment approvals do not however represent apartment supply in these locations. 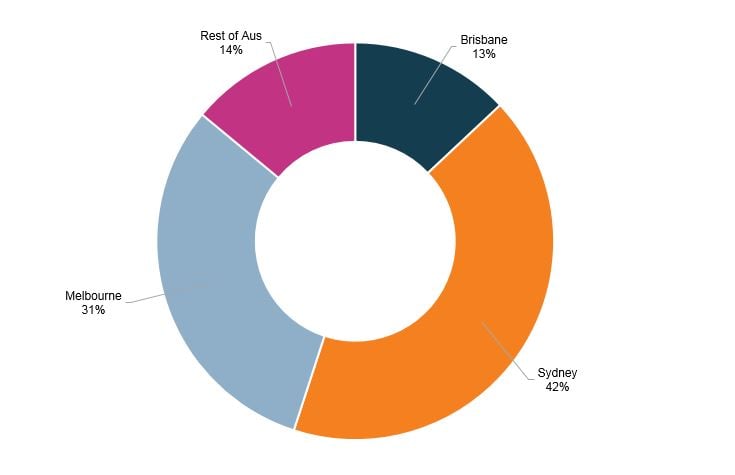 Despite high levels of development approvals for the year ending June 2017, sales volumes are declining and settlement risk is increasing due to a number of factors that affect both foreign and domestic purchasers. Purchasers are dealing with stricter lending conditions and increasing finance costs as a result of restrictions placed on financial institutions, whilst foreign purchasers are also affected by the new vacant tax, foreign ownership restrictions in large developments, capital gains tax changes and the previous stamp duty surcharge. When the impact of declining sales numbers is coupled with rising construction costs it is logical to expect that a number of these development approvals will be deferred or abandoned.

As a result of the federal budget and state legislation there have been a number of recent changes to the costs involved in buying and selling property in Australia. Place advisory has summarised the major changes below and provided a comparison of how they will affect buyers in Brisbane, Sydney and Melbourne.

Stamp duty concessions and exemptions are in favour of first home buyers giving them a leg up in their pursuit of property ownership.

The recent federal budget has also introduced changes that affect foreign investors. Foreign and temporary tax residents who have entered into a contract after 9 May 2017 are no longer eligible for a capital gains tax exemption through claiming main residence when selling a property.

There are also changes to CGT withholding tax for foreign vendors when selling their property.

These changes are likely to reduce foreign and investor demand in the Australian housing market while at the same time increasing the number of first home owners entering the market.