Place Advisory’s latest quarterly report has revealed the largest sales volumes recorded in Brisbane since 2017. 7,900 sales were made over the six-month period to March 31, 7 per cent higher than the five-year average. An astonishing figure considering the squeeze on stock and rising prices across the city.

Strengthened sales within the inner ring has seen the median price for houses within the 5km radius of the CBD jump to a record $1,050,000.

It is expected that Brisbane house prices will continue to rise and most likely won’t steady until there is either a significant uplift in stock on market, or an increase of interest rates. Something that isn’t expected to occur until the inflation rate target of 2 to 3 per cent is met.

Brisbane’s house market has prospered in the current market conditions, as growth has been experienced across Brisbane’s inner, middle and outer rings. Major banks have forecasted this growth to continue through 2021 and beyond. An eye watering projection for homebuyers, as the median price for a house in the Brisbane has now reached a record $755,000, 5.6 per cent higher than it was a year ago.

Competition for houses across the city is at an all-time high. Realestate.com.au’s latest ‘housing market indicators report’ revealed that searches for homes in Queensland were up 62% this month when compared to last year. Additionally, the latest ABS figures suggest that Queensland had a net inflow of 25,000 people over the past year, the highest figure in over 20 years. Consequently, Brisbane’s property market is experiencing its highest auction clearance rates in years, with most houses selling well above reserve.

In the six months to March 31, Buyers have shown the most interest in the following suburbs: 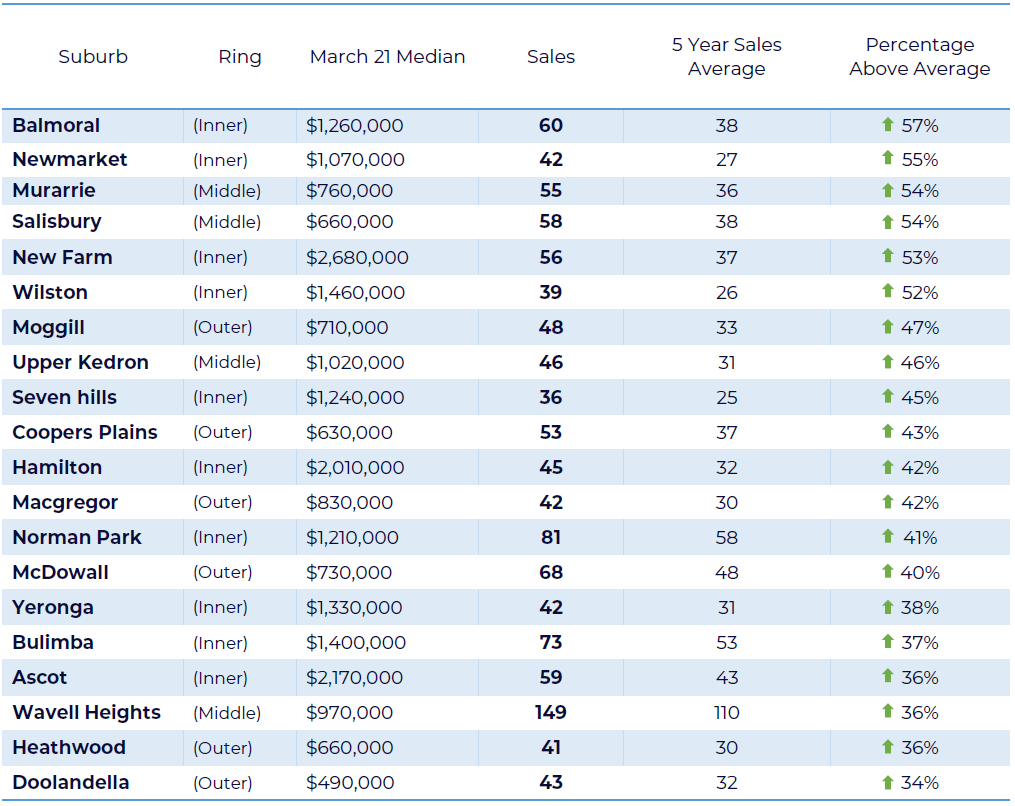 Place Advisory’s latest data suggests that the increased competition and price growth within the house market has compelled buyers to consider alternatives, as the uptake on inner and middle ring apartments has risen.

Historically, apartment prices are influenced by the price growth and affordability within the house market. If current market conditions continue, we expect apartment growth in the inner and middle rings to materialize, as buyers become further priced out of the house market.