Following on from Part 1 of Brisbane’s Inner, Middle and Outer Rings report, a more in-depth analysis on the property market in these three rings is provided below. A summary of the top five suburbs in terms of capital growth, affordability and most expensive houses and apartments in each ring has also been provided.

The graph below breaks down the number of sales and median sale price for houses in each of the three rings over the past ten years. As expected, Brisbane’s Inner Ring is the most expensive region, recording a median house price of $875,000 over the six month period ending December 2016. Houses in the Inner Ring are 22% more expensive that those in Brisbane’s Middle Ring, recording a median sale price of $715,000 and 56% more than houses in the Outer Ring at a median price of $560,000.

In terms of the number of houses sold, Brisbane’s Outer Ring saw the highest number of sales. Representative of the supply, the six month period ending December 2016 saw 3,764 transactions take place in the Outer Ring, accounting for half of total sales across Brisbane. This was followed by the Middle Ring, which saw 2,543 sales occur, whilst Brisbane’s Inner Ring recorded just 1,183 transactions for the period.

It’s no secret that the Brisbane apartment market has suffered in recent periods. As shown in the graph below, each of the three regions have experienced varying amounts of decline over the past two years.

The Inner Ring saw the highest number of transactions occur over the December 2016 six month period, recording 2,252 apartment sales. This was followed by the Middle Ring, which saw 1,418 sales and the Outer Ring, recording 938 transactions.

The table below outlines the top five performing suburbs for houses and apartments in each of Brisbane’s three rings over the past 12 months.

The best performing Inner Ring suburb for houses, in terms of capital growth was Seven Hills. Seven Hills, located on the cusp of Inner Brisbane, recorded an average of 10.3% growth. This was closely followed by South Brisbane, which saw 10.2% growth. For apartments, the tightly held suburb of Highgate Hill saw the highest capital growth, recording 11.4% growth.

As shown in the table below, Place Advisory has summarised the five most affordable suburbs, based on median sale price, for houses and apartments in Brisbane’s Inner, Middle and Outer Rings over the past 12 month period.

Within Brisbane’s Inner Ring, the riverfront suburb of Fairfield was the most affordable for houses, recording a median sale price of $675,000. For apartments, East Brisbane topped the list, with median prices currently sitting at $395,000.

Meanwhile, Rocklea is the most affordable suburb for both houses and apartments in Brisbane’s Middle Ring, recording a median of $385,000 and $320,250 respectively. The suburbs older style homes, industrial areas, lack of amenity and high flood risk in recent years have kept property prices low.

Brisbane’s Outer Ring, home to larger blocks of land, cheaper homes and less amenities, are generally Brisbane’s most affordable suburbs. However, with improving infrastructure these suburbs are becoming increasingly popular, particularly with first home buyers and young families. Houses in Wacol and apartments in Deagon were the Outer Rings most affordable suburbs, with median sale prices currently sitting at $305,500 and $125,000 respectively. 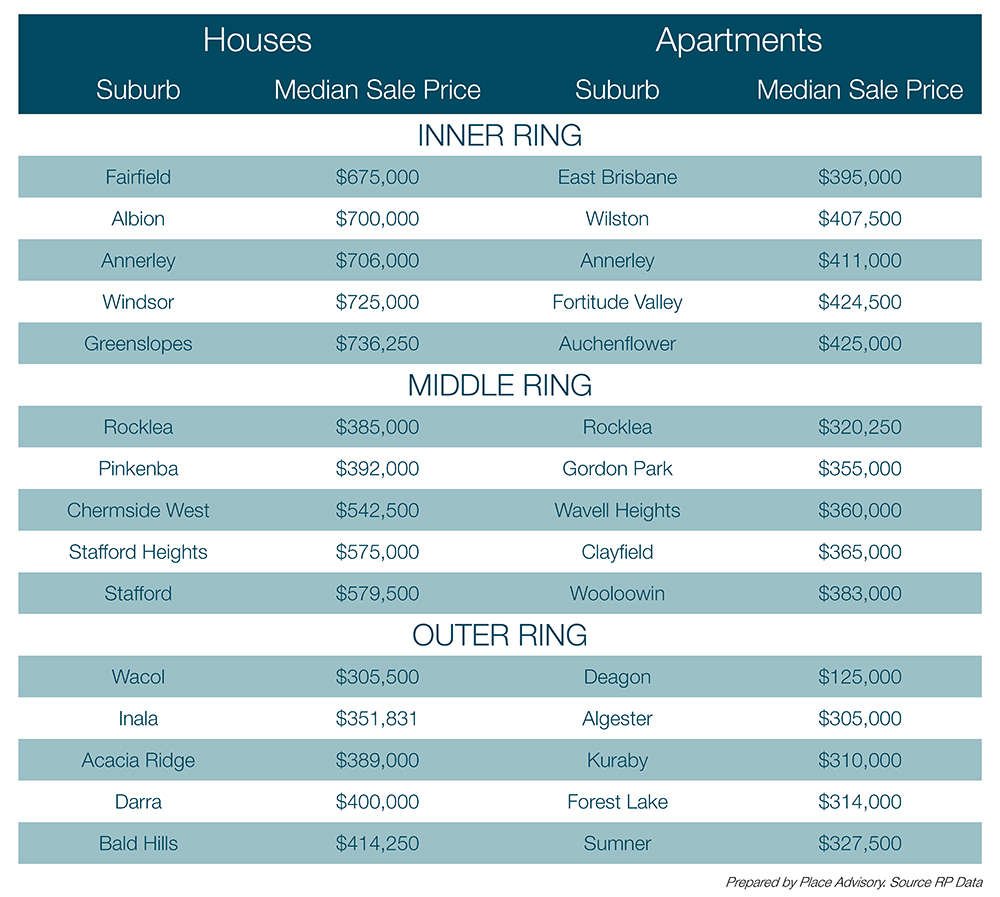 Brisbane’s five most expensive suburbs in each ring have also been summarised below.

Ascot, located in the Middle Ring, is regarded as one of Brisbane’s most prestigious suburbs as it offers easy access to the   CBD and excellent local amenities and infrastructure. Ascot is the Middle Rings most expensive suburb, recording a median house price of $1,344,000. For apartments, the tightly held suburb of Bardon tops the list with the median apartment price currently sitting at $622,750.

The suburb of Robertson in Brisbane’s Outer Ring recorded the highest median sale price, currently sitting at $1,072,500. The suburb is a popular choice for young families as it offers large houses and easy connectivity to the CBD and surrounding suburbs, Westfield Garden City, Griffith University and the QEII Jubilee Hospital. Kenmore in Brisbane’s outer west recorded the highest median sale price for apartments, currently sitting at $639,500. 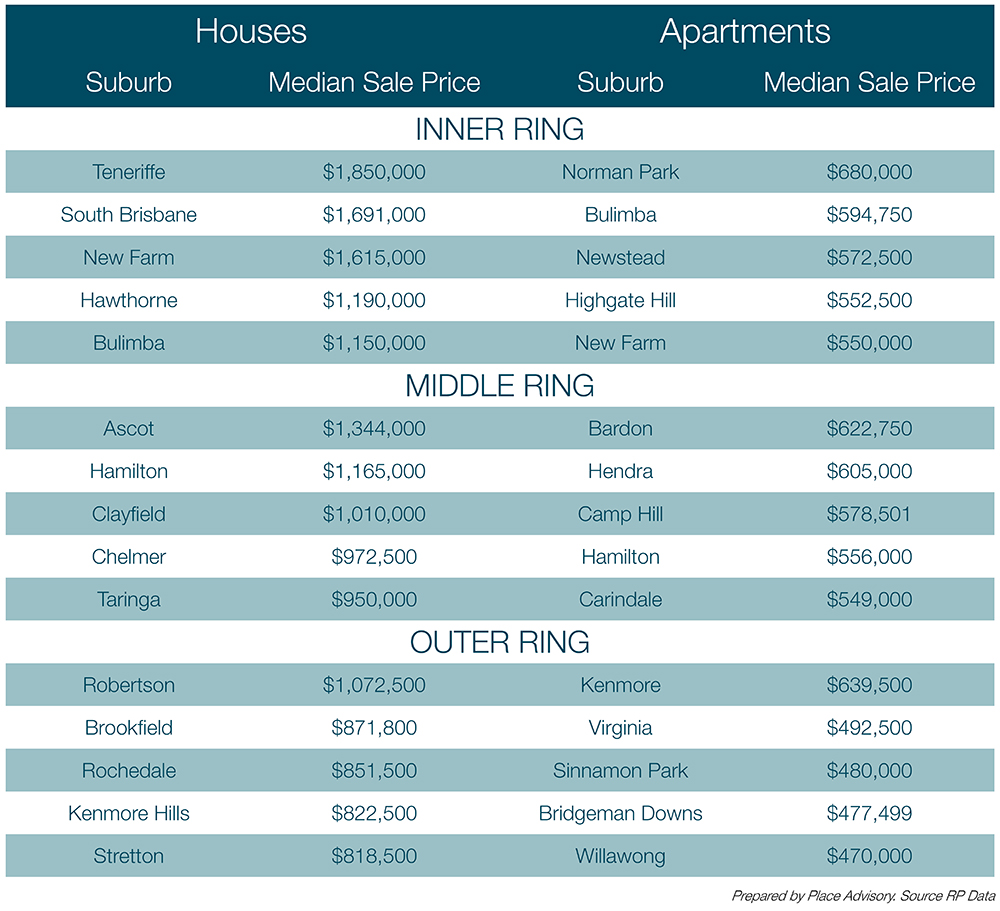 *Note: Suburbs with five or less sales have been excluded.