The Inner Brisbane market is leading the city’s property price recovery as confidence and demand begin to rise. In this short blog, we take a look at the performance of different residential building sizes and see what is performing best and where the recovery in prices is occurring. To do this we have taken all sales in Inner Brisbane and categorized the building size into three brackets; small scale (10 units or less), medium scale (11 to 40 units) and large scale (41+ units). Read on for the results.

The Inner Brisbane unit market is showing strong signs that re-enforce the notion that the market is recovering and returning to growth. On the back of interest rate cuts and other market stimuli, all three building sizes have recorded stronger results in the last six month period ending September 2019 compared to the previous period. However, it is units from smaller sized buildings that are leading the way, having increased by an impressive 4.6% in the last six months to record a median price of $446,000. Units from small scale units are now at their highest median price since 2017 and approaching their previous peak. 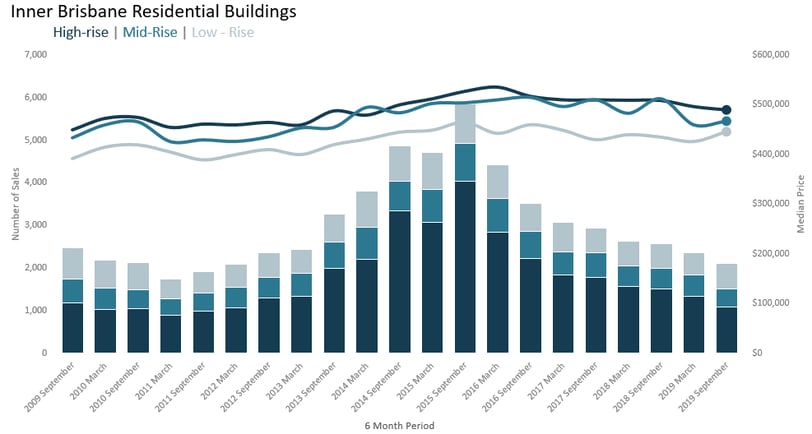 Medium sized buildings also recorded positive growth of 1.6% in the past six months ending September 2019 after having continued their downward trend to start the year. The median price of these units is now $467,500. On the other hand, large sized buildings continued to record softening prices, albeit at a slowing rate of decline, recording a 1.3% fall in prices to rest at $490,000 in the six months ending September 2019.

The results have revealed that the unit market recovery is underway and being led by units in smaller buildings which is consistent with a shift in buyer preferences in the last two years. The weakness that remains in the large scale building market is restricting results of the entire unit market to record price increases due to its large market share. Nonetheless, it is clear that the market has reached a turning point and is poised to re-enter a growth stage in the near future.