Brisbane’s property market recovery is being led by the city’s Inner Ring where many prestigious and waterfront properties can be found. These properties generally make up just a small proportion of the overall market ensuring they are in high demand. In this short blog, we separate Brisbane’s housing and unit markets into waterfront and non-waterfront and look at the performance of each segment. We find that each market segment is now recording better results as the market enters the early stages of a new growth cycle. Read on to see which properties have outperformed.

Waterfront houses Brisbane wide have accounted for an average of just 0.24% of house sales in Brisbane over the past 10 years as they are extremely rare and highly sought after. It is no wonder then that their median price was recorded at $2.43 million in the six months ending September 2019 over just 12 sales. At this price, they are 3.71 times more expensive than non-waterfront houses. 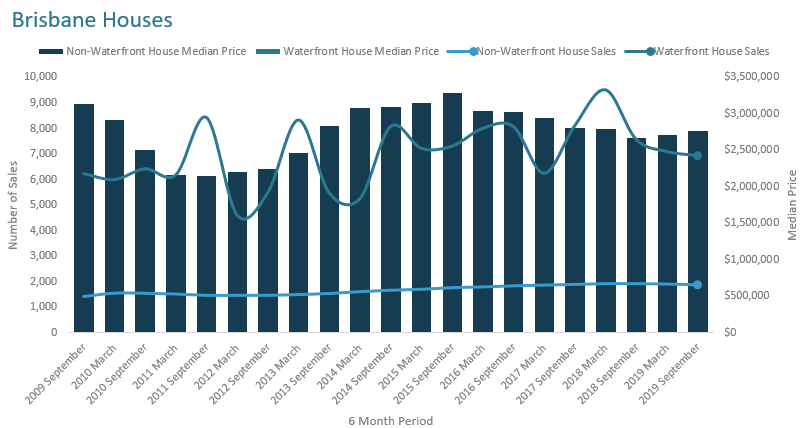 The small number of waterfront house sales results in a median price that varies from period to period. Therefore, although the median price was recorded lower in the most recent period ending September 2019, there is an apparent longer-term uptrend occuring.

Non-Waterfront houses have also performed admirably over the past 10 years, increasing by the most of any property type at 32.9% in that time reaching a median price of $655,000 for the six month period ending September 2019.

Waterfront Units have accounted for an average of 3.6% of unit sales in Brisbane over the past 10 years and have emerged as the leaders of the market recovery increasing by 3.4% to $827,000 in the last 6 months ending September 2019. Waterfront Unit median prices are now 194% the price of non-waterfront units as demand for these properties remains strong.

Non-waterfront units recorded a median price of $427,000 over the same period holding relatively steady over the past 6 months.

It is clear that the property market recovery is well underway through all segments of Brisbane with improved performance over the past 6 months compared to previous periods. However, the prestige of waterfront units is leading the way as demand for these properties remains strong. Nonetheless, it is non-waterfront houses that have proven to be Brisbane’s best performers over the last 10 years.

Where to Buy: The Five Best Suburbs to Buy Apartments for Under $500,000