Brisbane is a city of many contrasting areas. From the Inner City dense high-rise apartment landscape of Kangaroo Point to the mansions on acreage in the outer suburbs to the newly gentrified lifestyle suburbs bursting with restaurants, entertainment and retail – Brisbane has a bit of everything. But which suburbs do property owners prefer the most? This quick report analyses those property owners who have bought multiple properties and which suburbs they prefer to re-buy into or not.

Re-buying or not into an area can be attributable to four main factors.

Below are the results.

Suburbs where people choose to re-buy into

In order to break this analysis down it is necessary to use a long time frame, given the average repurchase timeframe historically is approximately 4.7 years. Thus, newly established markets such as Newstead are not likely to feature prominently at this stage. Nonetheless, we have highlighted the top 10 suburbs (SA2 areas) in Brisbane that have historically had the highest rate of re-buying into the area when considering buyers who have purchased more than one property. 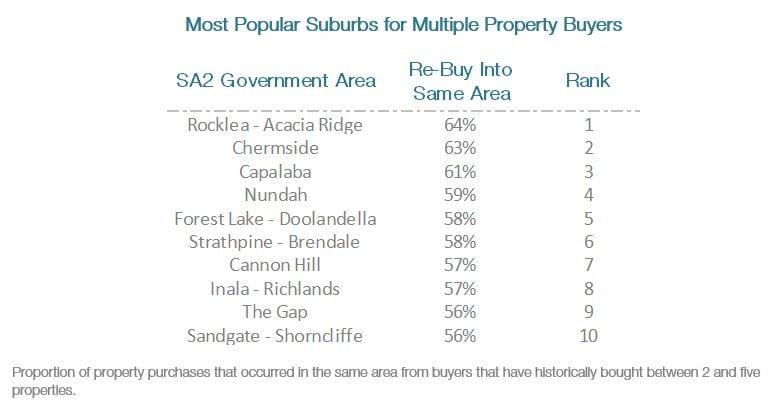 Not surprisingly, the top 10 suburbs are generally located in the middle and outer Brisbane rings where prices are more affordable. This result confirms that affordability plays a strong part in whether people re-buy into the same area. These suburbs are also likely to keep buyers in the area with their desirable lifestyle traits such as Wynnum’s bayside culture and The Gap’s peaceful green atmosphere. 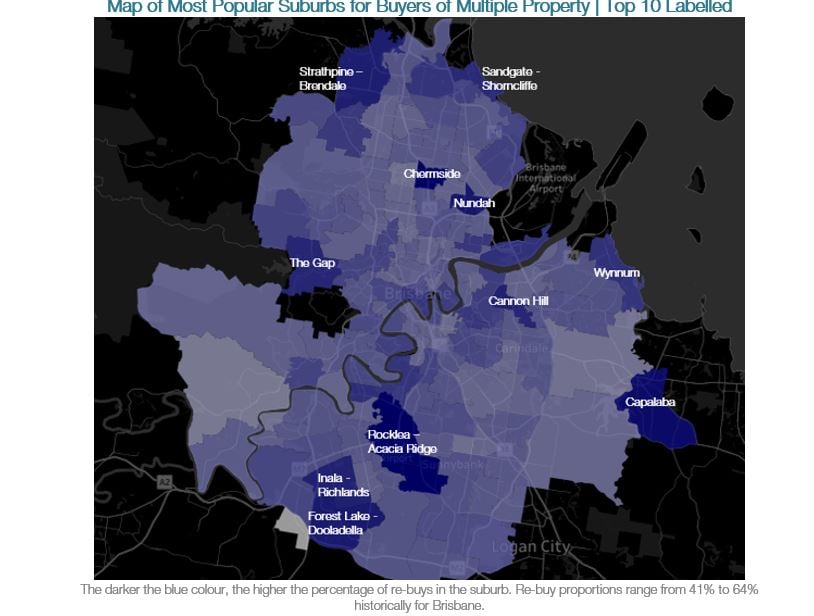 Looking at this map, it becomes clear that there are pockets around Brisbane that encourage people to re-buy in the area. These pockets all have important lifestyle factors about them from laid back coastal vibes to inner city entertainment and are suited to all types.

Next, we focus on which suburbs of Brisbane people aspire to buy in. These suburbs may be too expensive for an initial purchase for some or offer a different lifestyle option whether that may be moving away from the CBD to the quieter suburbia or for those wanting to move closer to the action in Inner Brisbane. 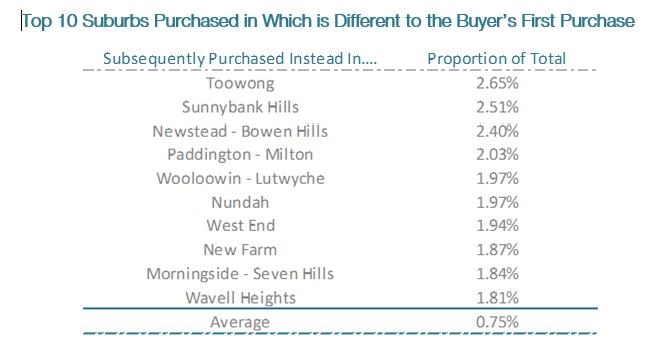 These results help to explain multiple aspects of the Brisbane property market. Firstly, new apartment markets such as West End, Milton and Newstead have made this list indicating their desirability and the acceptance of apartment living. Secondly, the presence of Middle and Outer Ring suburbs, Sunnybank Hills, Morningside and Seven Hills show that these suburbs are highly desirable as they provide less expensive options to the Inner Ring and offer a safe and comfortable lifestyle while drawing people to the area. However, it was Toowong, that took out the top spot on this list.

Toowong has historically attracted the largest proportion of buyers from other suburbs. The suburb itself is filled with leafy streets and a sense of tranquility, it has its own shopping centre yet is close to a large commercial centre in Indooroopilly, the University at St Lucia, the Waterfront and the CBD. It also has a pedestrian path running along the river directly into the CBD and beyond, ferry, bus, public bikes, rideshare scooters and train transport options to go with a variety of property options from luxurious houses to affordable apartments and everything in between.

In this short report, we have looked at which suburbs which have the highest proportion of people re-buying in the area. We also looked at which suburbs attract buyers from different areas. In the former, affordability and lifestyle were two aspects that likely played the biggest part. In the latter, it was the acceptance of apartment living and middle ring suburbs that offer value for money, and a relaxing atmosphere without being too far away from the CBD. Toowong was identified as the suburb which has historically attracted the most buyers from other areas while Rocklea and Acacia Ridge have historically had the highest proportion of buyers re-buy in the area.

Which of Brisbane’s Four Regions is the Best Performer in 2019?